A comprehensive & unbiased breakdown of the best VPN services in 2020

There are hundreds of VPN providers out there, but which is the best one for you? We’ve listed the all-around best VPN services, all of which allow you to unblock streaming services on any device.

Imagine this – Intelligence agencies are tracking your online activities, and your internet service provider (ISP) is recording and selling your data to third-parties.

Meanwhile, online streaming services are blocking you from a world of entertainment because of your location, and advertisers are following you around the web.

We don’t want to startle you – but (depending on your location) take the above information and consider it a fact.

How do you know which VPN to trust?

If you search online, you’ll find a long list of VPN comparison sites offering different opinions. And that’s the problem. They all recommend different VPNs as the “best”.

The truth is: there is no such thing as the “best” VPN.

Most VPN comparison sites are essentially lying to you. For example, Mashable always recommends PureVPN as one of the best VPNs. But PureVPN is known for giving user data to the FBI. 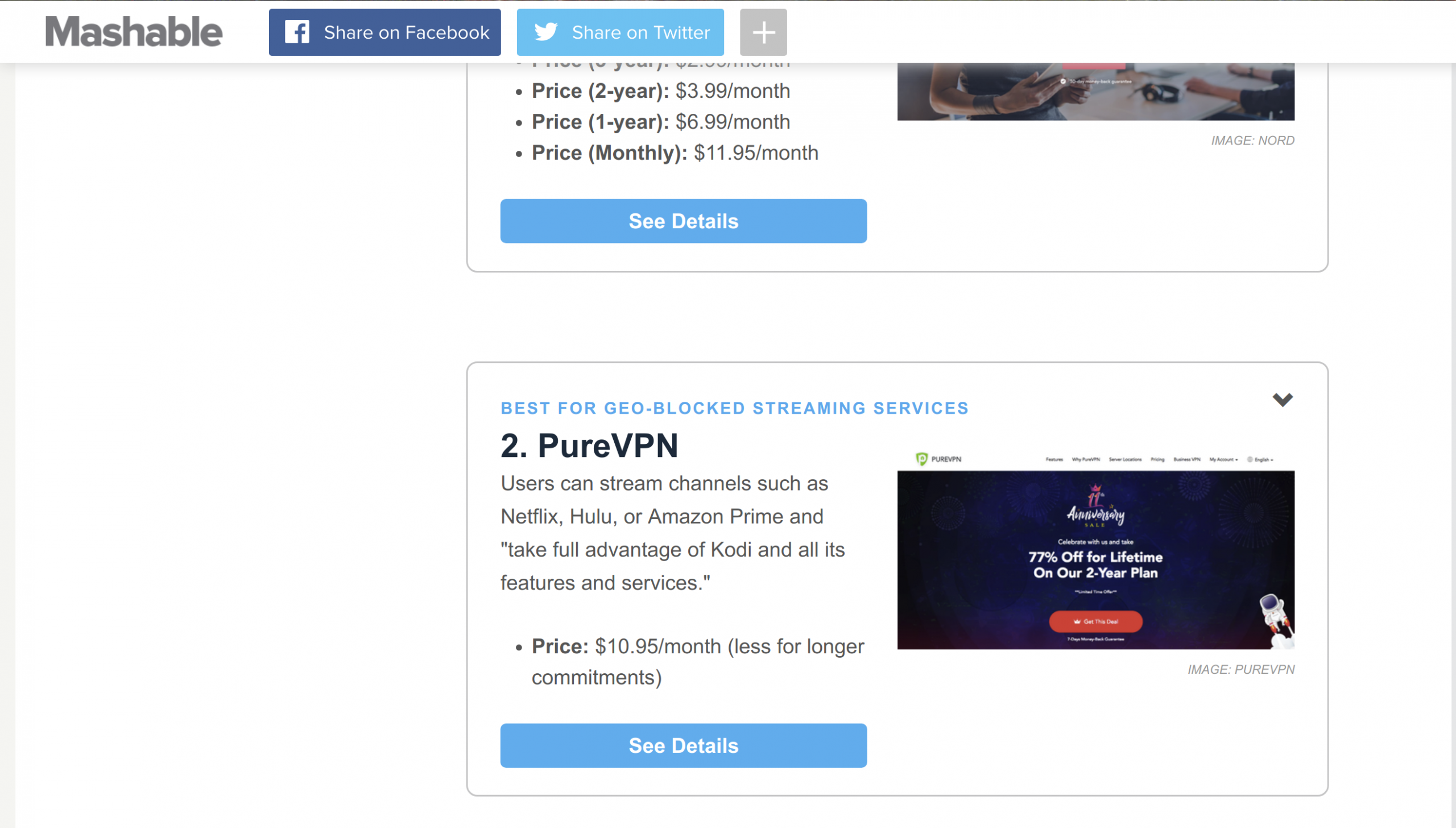 Any site that praises HideMyAss – as CompariTech does – is also lying to you. HideMyAss is another VPN caught handing sensitive information to the FBI.

The reason behind the lies: affiliate marketing.

PureVPN pays Mashable 50% on all sales made through the Mashable website, while HideMyAss gives CompariTech anywhere from 40% to 100% commission.

Of course, there isn’t anything inherently wrong with review sites making money via affiliate marketing. However, it’s a huge issue for the VPN industry when dodgy providers can buy the market and get away with it.

This is why we don’t partake in shady deals.

When we publish articles, our information is based on independent research. We want to help you find the best VPN for you – and this means giving you the facts, so you can make the final decision on your own.

For this reason, all VPN’s listed on The VPN Shop can be considered the “best overall VPNs” and this is why we let you choose the order they are shown based on the security, privacy and overall features offered by each VPN.

How to Choose the Best VPN

When comparing VPNs and choosing the best one for everyday use, here are a few features to look for:

All of the VPNs recommended above meet most – if not all – of the features listed here.

It would be great if all VPNs performed well and could be trusted.

If you want to stay safe online with a VPN, here are a few to avoid:

Why do I need a VPN?

Without a VPN, the government, intelligence agencies, your ISP, hackers, and advertisers can spy on you. Depending on your location, you might also be blocked from using popular streaming services and/or websites.

How does a VPN work?

In short, a VPN masks your IP address by replacing it with the IP address of the server you’re connecting to. So, for example, if you’re located in the UK and you connect to a server in the US, your IP address will change to a US IP address.

Can my ISP see my traffic?

Yes, and they can legally sell that information to third-parties without notifying you. However, when you use a VPN, your ISP becomes none the wiser.

Can my ISP block my VPN?

If you’re using a VPN with PPTP protocol, then yes. However, our recommended protocol, OpenVPN, cannot be blocked by ISPs.

Yes, using a VPN is 100% legal in most countries. Notable exceptions where VPNs are banned or otherwise restricted include China, Iraq, North Korea, and Russia. However, any illegal activities conducted via a VPN remain illegal.

Can my VPN unblock Netflix?

Many VPNs are unable to unblock Netflix. If you’re looking for a VPN capable of unblocking Netflix, consult our article on the Best Netflix VPNs.

Can I torrent with a VPN?

This depends on the VPN provider. Consult our article on the Best Torrenting VPNs for a list of VPNs that support torrenting.

Am I completely anonymous with a VPN?

No. There are no VPNs that can provide 100% anonymity online. However, with the right VPN and security measures, you’re as close to 100% anonymous as you can get.

Can I use a free VPN?

It’s never recommended to use a free VPN service, as many are dangerous.

Recent Articles from The VPN Shop

How do we Rate VPN Providers?

CyberGhost enters the scene with a plethora of server options: 4,900+ servers in 58 countries, to be exact. This means you can easily stream geo-restricted content on sites like Netflix.

CyberGhost is also based in Romania – a positive for users concerned with online privacy, as Romania isn’t under 5 Eyes, 9 Eyes, or 14 Eyes jurisdiction.

If there’s one complaint we have with CyberGhost, it’s their lack of additional security features (like stealth mode). CyberGhost offers 24/7 live chat support and a 24-hour free trial.

ExpressVPN is another excellent VPN choice, boasting a strict no-logs policy with independent audits to back it up.

ExpressVPN is one of the fastest VPNs on the market, with 3,000+ servers in 94 countries (160 server locations).

You do pay for that speed, though – subscription plans are on the expensive side. You’re also limited to 5 simultaneous connections. Users should also be aware that ExpressVPN is not located in the British Virgin Islands, but rather Hong Kong.

NordVPN is considered one of the most secure VPN providers on the market.

The Onion Over VPN feature is another major plus. Designed specifically for P2P and torrenting connections, it offers an extra layer of online privacy all users will appreciate.

When it comes to unblocking streaming services, NordVPN has 5,719 servers across 60 different countries – most of which are optimized for accessing geo-restricted content.

You can even buy a Dedicated IP ($70) to make avoiding blacklists easier.

We don’t like complaining, but NordVPN is also rather expensive. If you want to save money, opt for a longer subscription to enjoy the best discounts. Additionally, like ExpressVPN, NordVPN isn’t upfront about their true location – which is Lithuania, not Panama.

Perfect Privacy is aptly named. The VPN is based in Switzerland, which is generally considered one of the best VPN locations.

Perfect Privacy’s “perfect privacy” doesn’t end there: all of their servers run on RAM disks so heavily encrypted it’s technically impossible to store any of your data.

The provider also offers a robust Kill Switch and a Stealth VPN feature that allows their servers to sneak under the radar of VPN blacklisting software. This is good news for anyone wanting to use their VPN for streaming and/or torrenting.

Unfortunately, there are a few areas where Perfect Privacy falls short – namely in servers. They only offer 58 servers worldwide, spread out over 40 server locations in 26 countries.

Surfshark is easily one of the best VPNs for a budget-friendly solution to online privacy. In fact, they’re pretty much a steal.

Unlike ExpressVPN, the company is actually based in the British Virgin Islands. This makes it one of the safest VPNs in terms of native data retention laws.

NoBorders Mode allows for the online streaming of geo-restricted services (like Netflix), while Camouflage Mode ensures even your ISP won’t realize you’re using a VPN.

Surfshark is clearly up to the task of competing with ExpressVPN. Two distinct advantages the newer VPN has over the other provider: unlimited simultaneous connections and an ad-blocker.