One of the biggest things preventing people from securing their privacy with a VPN typically involves cost. You might want to utilize the benefits of a VPN, but your wallet might be cursing at those premium prices.

The good news is – you’re not out of luck.

If you know where to look and what to look for, you can find an affordable VPN that doesn’t skip on quality. The key is making sure the affordable VPN provider hits all the “must haves” of a VPN service.

But what are the “must haves”?

Fear not reader, for TheVPNShop.com is here to provide answers by sharing our research on “What is the Cheapest VPN in 2021?” along with the “must haves” to look for when doing your own VPN research.

What are Cheap VPN “Must Haves”?

When you’re in search of a VPN, you need to double check certain features are included. This is even more relevant when searching for a cheap VPN, as the provider might be offering a cheap service in exchange for lax security or privacy.

For example, you might be paying $5.00 a month for a VPN service that only offers 128-bit encryption or stores a buttload of logs – in which case, the whole point of using a VPN is negated.

So, to get you started, here are the “must haves” of a cheap VPN:

But the tricky part doesn’t end there.

Depending on how you intend to use your VPN, you might also want to include in your check list:

We don’t blame you – finding an affordable VPN that doesn’t cut corners is difficult. Fortunately though, after in-depth research and analysis, we found 5 of the cheapest VPNs that still offer high quality service.

The Cheapest VPNs (based on one off monthly price)

First things first: what pops up when you google “What is the cheapest VPN?”

9 out of 10 times, it’s nothing but premium VPNs listed at their “cheap” yearly prices.

While there’s no denying a good deal on a longer subscription plan is great, you’re likely not interested in forking over $75 on a 1-year NordVPN subscription – especially if you’re literally googling the cheapest VPN.

Instead, you’re probably hoping for the cheapest VPN based on monthly prices. For this reason, the cheapest monthly VPNs are exactly what we’re detailing below (in alphabetical order).

Despite the con of being based in Singapore, Ivacy VPN is an affordable VPN provider who doesn’t cut corners. They offer a strict no-logs policy, 256-bit AES encryption, the OpenVPN protocol (among others), a killswitch, DNS leak protection, and a split tunneling feature.

You can purchase a 1-month Ivacy subscription for $9.95.

Next up on our list is Mullvad VPN, a Swedish VPN provider who doesn’t let their location control their service. How exactly do they do this? By offering the strongest anonymity possible!

With Mullvad VPN, you get an airtight no-logs policy, military-grade encryption, the OpenVPN protocol, a killswitch, DNS leak protection, 5 simultaneous connections, and a split tunneling feature.

And while Mullvad does fall a little short with only 600+ servers in 36 countries, they make up for it by offering competitively high speeds. Plus, if you want to stream, Mullvad works with Netflix UK and BBC iPlayer!

Finally, Mullvad is also one of our recommended torrenting VPNs.

You can purchase a 1-month Mullvad VPN subscription for $5.50.

PrivateVPN is another Swedish VPN provider offering an affordable service with “must have” features, including 256-bit AES encryption, the OpenVPN protocol, a killswitch, 6 simultaneous connections, and DNS leak protection.

And although PrivateVPN only offers 150+ servers in 60 countries, they also have better than average speeds and the ability to unblock streaming services like Netflix and BBC iPlayer, making them an ideal streaming VPN.

You can purchase a 1-month PrivateVPN subscription for $7.67. 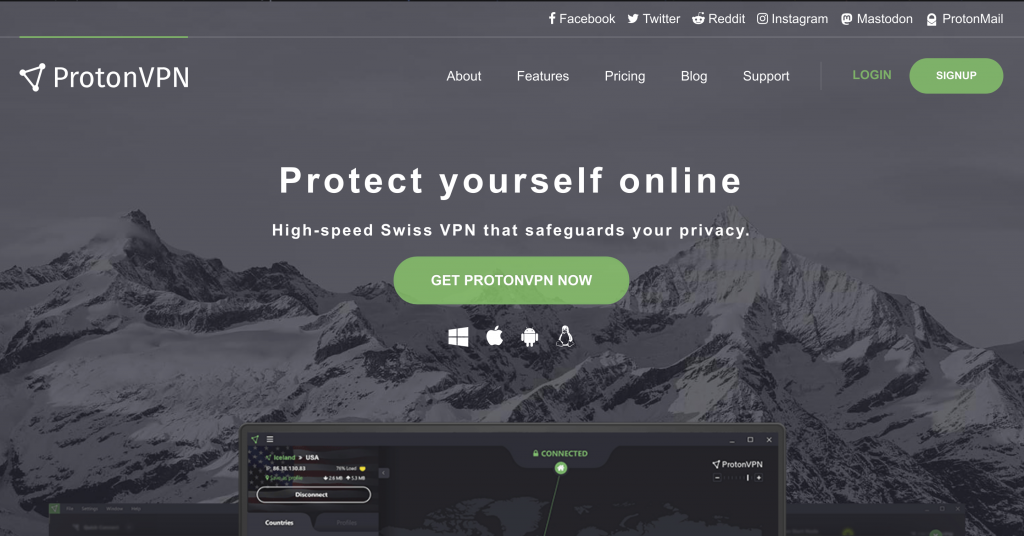 ProtonVPN is a hybrid of ProtonMail – a free-to-paid encrypted email network established by CERN scientists, engineers, and developers.

The VPN provider is based in Switzerland and offers a strict no-logs policy, 256-bit AES encryption, the OpenVPN protocol, a killswitch, DNS leak protection, 10 simultaneous connections, and a split tunneling feature.

Additionally, the provider offers 900+ servers in 50 countries with better than average speeds and the ability to unblock Netflix US.

You can purchase a 1-month “Plus” ProtonVPN subscription for $8.00.

(ProtonVPN also offers a “Basic” monthly subscription at $4.00, but you’re limited on features.)

VPNArea also offers a Double VPN feature, though they fall short on servers (100+ in 65 countries), resulting in just above average speeds.

Fortunately, VPNArea makes up for this by unblocking a myriad of streaming services, including Netflix and BBC iPlayer, while also offering 6 simultaneous connections.

VPNArea also made our list of the best torrenting VPNs.

You can purchase a 1-month VPNArea subscription for $9.90.

Maybe you actually are looking for a list of premium VPN services with the best yearly deals. For this reason, we decided to include a short list of the 4 cheapest VPN yearly subscriptions:

What About Free VPNs?

Being able to rely on a free VPN sounds great…in fact, it sounds too good to be true.

That’s because it is.

And it only gets worse from there.

For example, most free VPNs have at least one (usually multiple) of the following issues:

If you’re desperate for a VPN service but you can’t afford a premium price tag, stick to the recommended VPNs in this guide.

However, as a last resort, you can also check out our guide on the Best Free VPNs.

While finding a high-quality premium VPN service at an affordable rate is difficult, it’s not impossible. At TheVPNShop.com, our goal is helping you by making your decision easier.

Now that you’re aware of the 5 cheapest VPNs, you can narrow it down to one provider based on your specific VPN needs. Be sure to check out our best VPN services comparison tool if you’re still struggling!