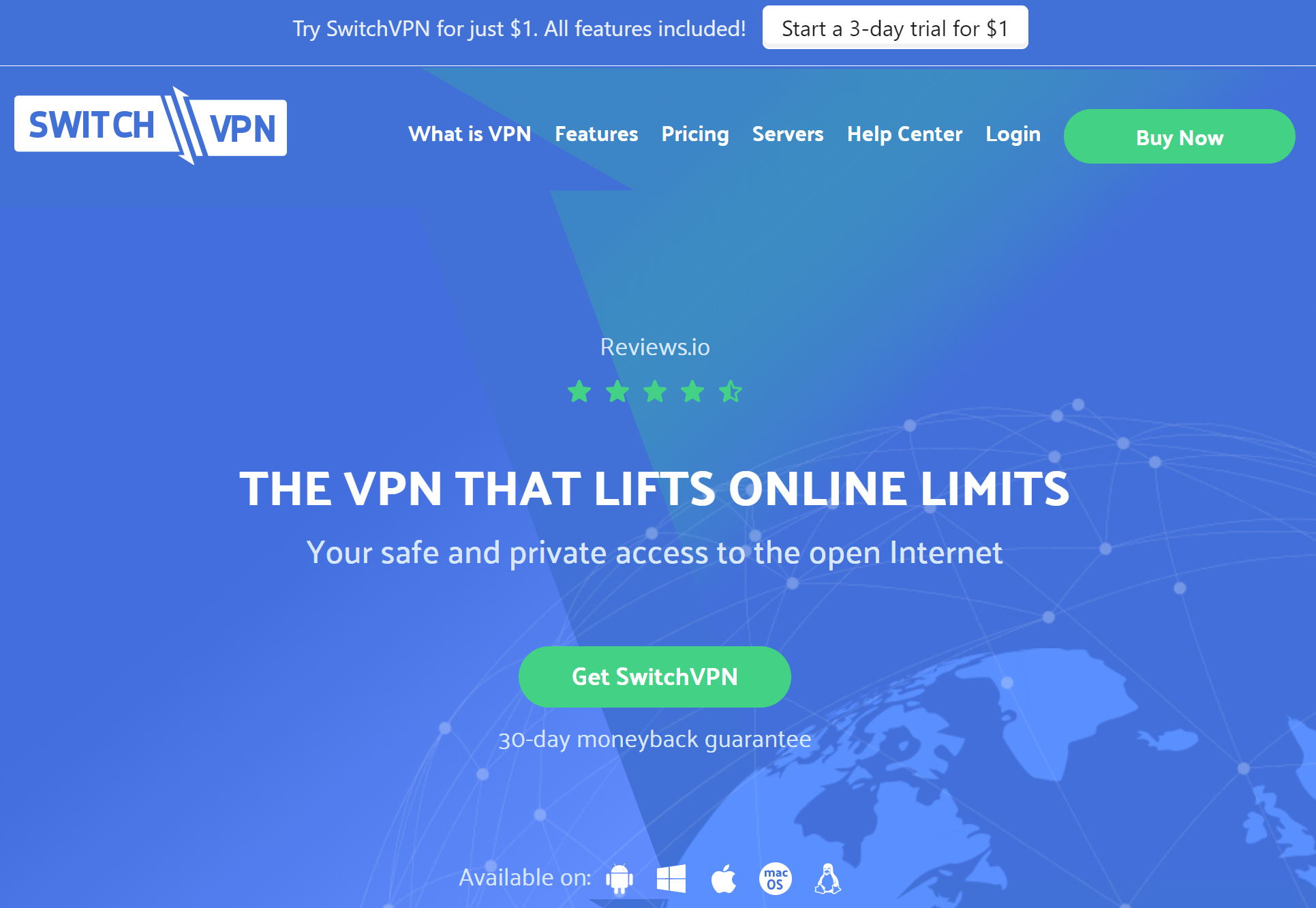 SwitchVPN was launched in 2015, when the founding team jumped into action because they felt the “free internet was under threat.”

So it makes sense the provider’s (apparent) slogan is “The VPN that lifts online limits.”

But does SwitchVPN really lift any online limits and give users “safe and private access to the open internet”? Several other providers promise the same and grossly under-deliver.

And on that front, we don’t trust most VPN review sites, as many allow their affiliate partnerships to dictate what their reviews say.

This is why we offer our 100% independent, BS-free reviews.

How SwitchVPN Compares to the Competition

Based in a 5 Eyes Country?

This is an issue for online privacy because the US is one of the titular nations behind the UKUSA Agreement, which developed into the 5/9/14 Eyes Alliances. 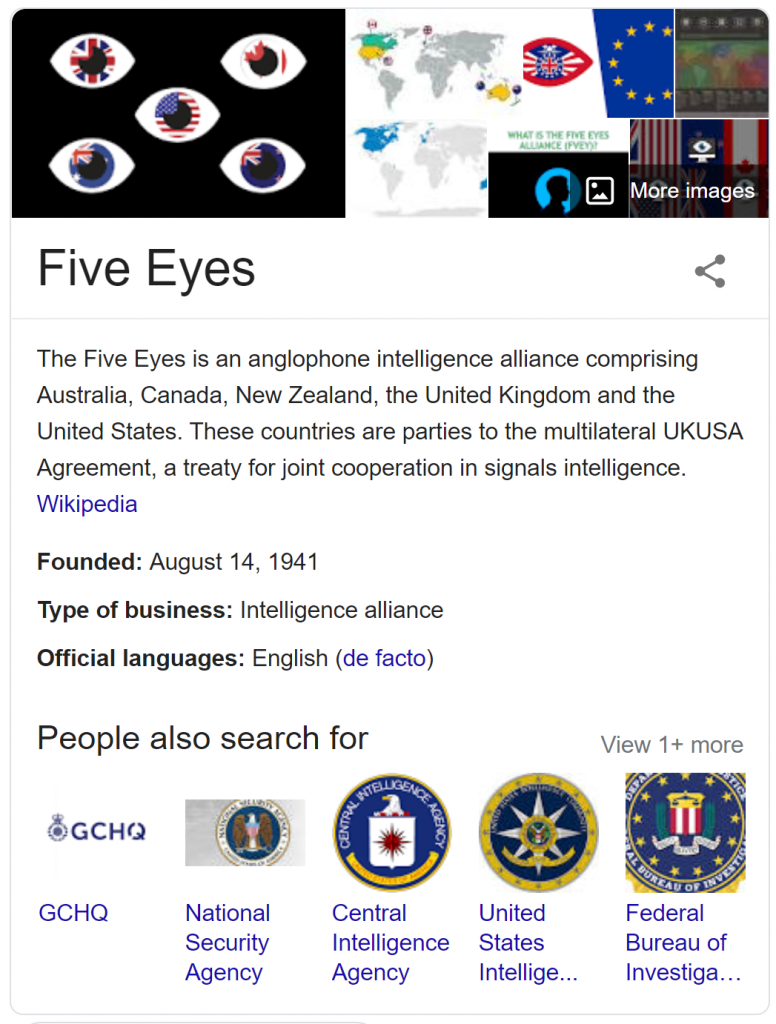 And let’s face it – the US continues to be a shining example of government surveillance and putting business interests above the individual rights of citizens.

Here’s where the lines get a bit blurry, though.

There are a few things pointing toward SwitchVPN being based in the US (Delaware, according to one source, California according to another). But one VPN reviewer suggests the provider’s parent company is actually based in India.

But India isn’t much better than the USA, as it’s also part of the SIGINT Seniors of the Pacific coalition (formed by the NSA together with other 5 Eyes intelligence agencies).

And, throwing a spanner in the works, India is also part of the Shanghai Cooperation Organization, which includes nations such as China and Russia.

Either way, SwitchVPN is not in a privacy-friendly jurisdiction. And the lack of transparency on the company’s part is a red flag too.

On their home page (and elsewhere), SwitchVPN promises a strict no-logs policy.

Most of this information makes absolute sense – or payment data and email address do, at any rate. But the Google Analytics (anonymous or otherwise) and web server logs make us nervous.

We completely understand these logs are separate to VPN sessions, but the mere fact our visiting their website is being recorded on a Nginx and especially Google log hardly instils a sense of trust in the company.

Granted, some form of analytics is necessary for running a website properly.

But the short “Company does not collect or log any traffic or use of its Virtual Private Network (VPN) service or Proxy” that follows isn’t exactly disclaimer enough to set our doubts at ease.

“Compliance with valid legal process” makes us even more nervous. Depending on where SwitchVPN really is located, there’s a lot of leeway involved.

All told, we’re not convinced SwitchVPN really has a strict no-logs policy.

We were able to confirm SwitchVPN is using 256-bit AES encryption. 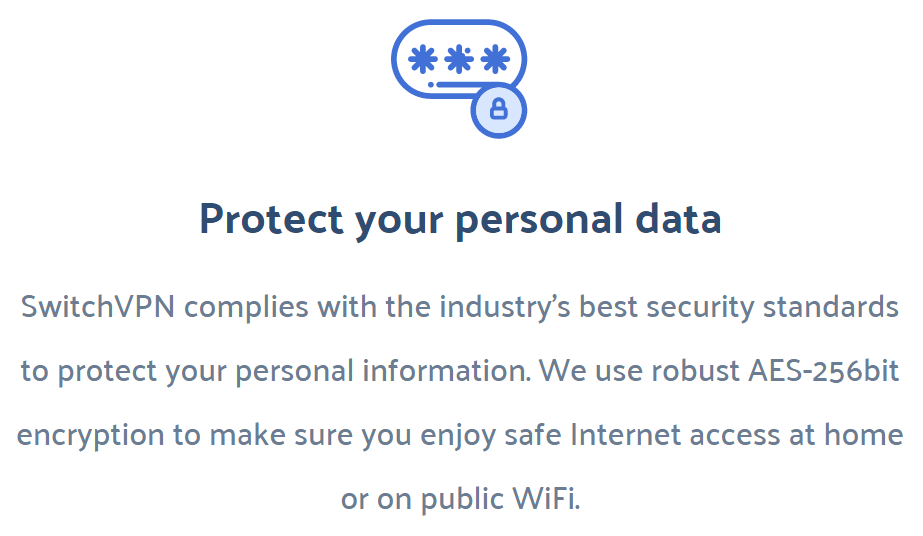 While this doesn’t make up for the less-than-ideal privacy policy ambiguity and the potentially worst-case-scenario location, it does at least show the provider takes cybersecurity measures seriously.

256-bit AES is, after all, the best commercially viable encryption standard a VPN could use.

SwitchVPN pairs that with the best VPN protocols too: OpenVPN, IKEv2, L2TP/IPSec, SSTP, and SOCK5.

The best part is the apps default to the best possible option – OpenVPN.

This, at the very least, shows SwitchVPN understands most VPN users aren’t going to know to check which protocol is being used… or how to change it properly.

Kill Switch and DNS Leak Protection (But No Split Tunneling)

As you probably know by now if you’re familiar with our VPN reviews, there are a few more security features we always look for.

The first of these is the kill switch.

Without this “insurance policy” feature, an unexpected (and unnoticed) loss of communication between your device and the VPN server translates into accidentally sharing your private data with the internet again.

SwitchVPN barely mentions having a kill switch, but we were able to confirm there is one built into their apps.

Next up is split tunneling. This feature allows you to send some of your online traffic via the VPN server and some of it through your normal (unprotected) connection.

SwitchVPN doesn’t seem to have any kind of split tunneling available. We don’t consider this a true issue, though, as this is admittedly a fairly advanced user tool. Think of it as a nice-to-have.

DNS leak protection, on the other hand, is an absolute must. And SwitchVPN goes the extra mile here by using its own proprietary DNS servers. 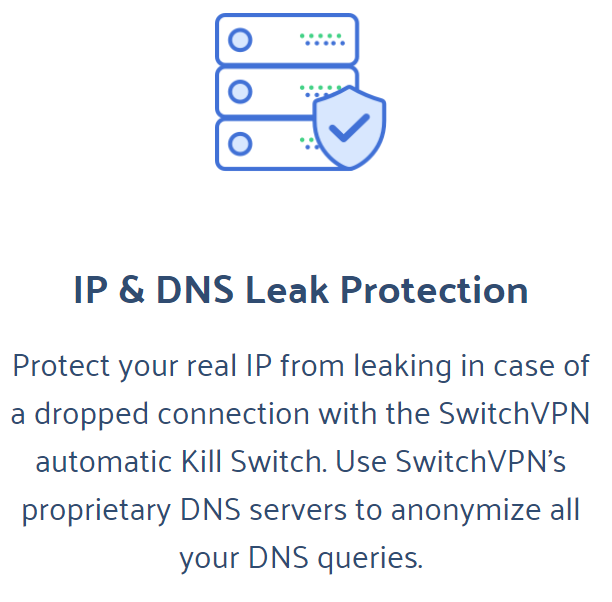 We put the service through a few tests to see if there were any IP, DNS, or WebRTC leaks. The good news is, they passed with flying colors! 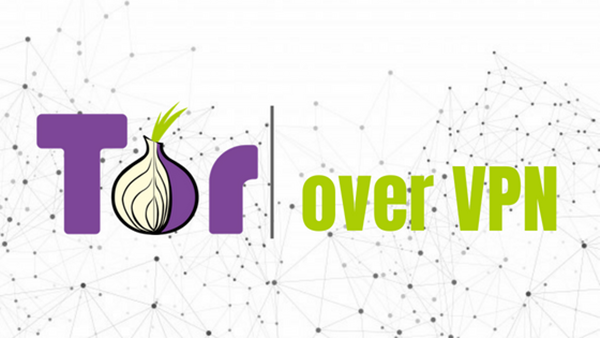 When a VPN provider doesn’t give us the option of using a Double VPN feature for extra protection, we want them to at least allow us to use the TOR-over-VPN method.

While by no means a fail-safe, it’s better than nothing in a pinch.

Thankfully, even though SwitchVPN doesn’t have a Double VPN option, they do allow users to double-up with The Onion Router.

We experienced the expected drop in connection speed while testing the TOR-over-VPN method with SwitchVPN. But other than that, there were no issues whatsoever!

Unfortunately, it’s time to take a turn back toward being the bearer of bad news.

We strongly prefer a VPN provider with at least 2,000 servers. Even better if they have more than that!

SwitchVPN only has 250+ servers in 43 locations worldwide (we actually counted 51 locations).

Considering the provider has only been in business since 2015, that’s not too bad. We’re a little more forgiving of newer VPNs having such a small server network.

But it could still lead to issues down the line, especially when it comes to network overload.

Network overload is just one of many, many things that can and do affect VPN speed.

Unfortunately, when testing a VPN’s speed for these reviews, there’s only so much we can do to minimize the effects of some of those things. For example, we always use the same devices, internet connection, and server locations.

But we can’t control server load.

Instead, we have to run multiple tests throughout the day. Here are the aggregate results, to give you a decent idea of the average speed to expect from SwitchVPN:

Imagine our surprise when, despite their small server count, SwitchVPN’s speeds still performed in our top ranks! 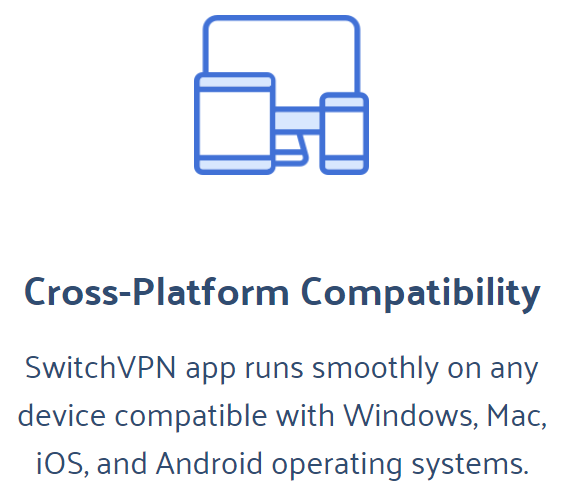 SwitchVPN doesn’t impress when it comes to device compatibility either:

That’s it, unfortunately – other than a manual set-up option for routers (which, granted, does open up a world of possibilities if you have the technical knowledge).

The number of simultaneous connections you get depends on which of the two subscription plans you opt for. With the Premium plan, you can only connect up to 3 devices at a time. The Family plan allows for 6.

We’d prefer to see 5 as the lowest number, as this is the industry standard. But, given how small SwitchVPN’s server network is, we can understand the lower figure.

Plus, if you do manage to get it set-up on your router, you can use it to get unlimited simultaneous connections at home!

SwitchVPN offers only 2 subscription plans, though they come in 2 terms:

Admittedly, those are some very attractive prices. And if you can look past the privacy concerns (which, personally, we don’t recommend), SwitchVPN is a fairly decent budget VPN.

What we also quite like is the provider has a 30-day money-back guarantee.

Add to that the fact the provider is willing to accept a more anonymous payment method like Bitcoin and you could say we’re duly impressed.

However, don’t lose sight of the fact that in this industry, you usually get what you pay for.

We’re also not exactly thrilled with SwitchVPN’s idea of a “trial” period. Whereas most providers will have the grace to give a 7-day free trial, or at least one that lasts 3 days, SwitchVPN asks that you pay $1 for 3 days. 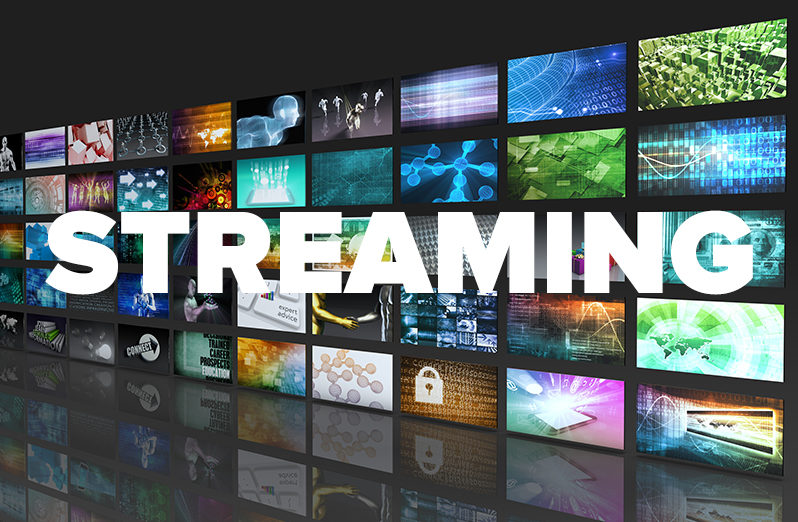 Another area SwitchVPN truly impressed us in is its streaming capabilities.

Once upon a time, all you needed was a VPN and you could watch any Netflix show you wanted, no matter the region.

But in 2016, that changed as the streaming giant introduced a robust anti-VPN software that has been helping it – and its competitors – identify and blacklist VPNs ever since.

While we wouldn’t go so far as to call SwitchVPN one of best Netflix VPNs, it did surprise us by being able to bypass the VPN block.

Not only could we stream Netflix from all of the US locations we tested, but we were also able to stream BBC iPlayer without issues! 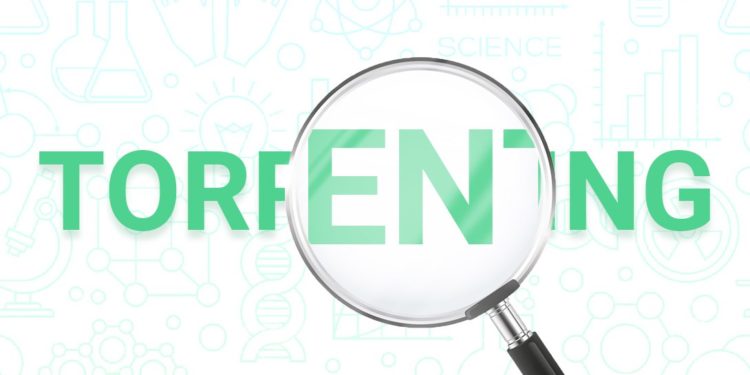 Another highly popular reason for wanting a VPN is torrenting.

There are some legal gray areas here, but it should be noted torrenting has perfectly legal uses.

What sets SwitchVPN even further apart from other, similarly priced VPN services is the fact they allow Peer-to-Peer (P2P) activities on all of their servers. Even some of the more premium VPNs have some limitations here!

However, bear in mind the ambiguity concerning SwitchVPN’s location. Some nations – like the US – are not recommended for a torrenting VPN.

We’ve seen others mention it took them days to get SwitchVPN installed and working properly.

Luckily it didn’t take us that long – or very long at all. 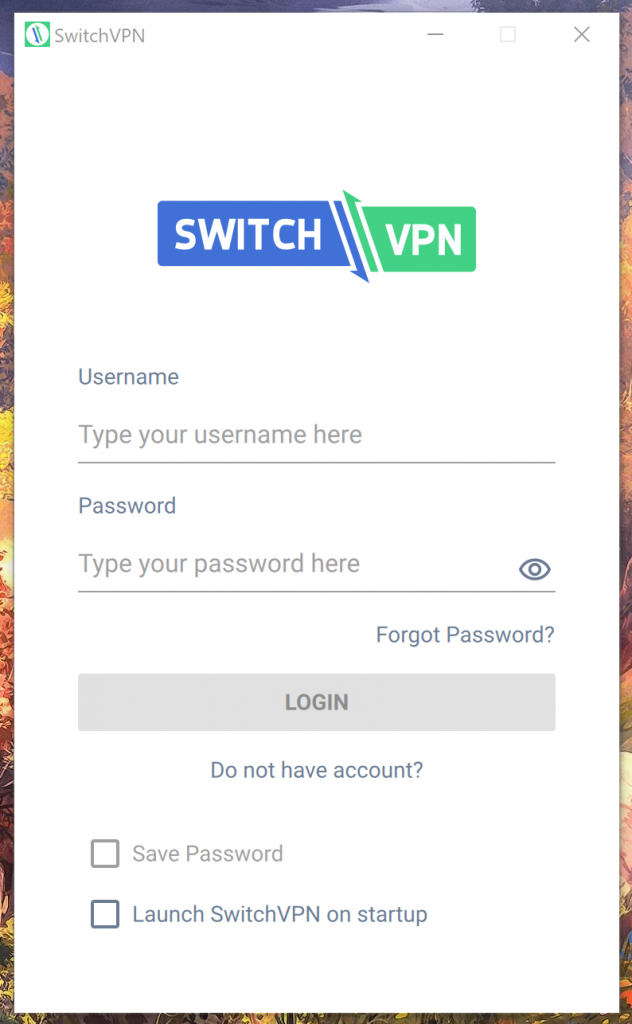 The app’s design is fairly simple and user-friendly. 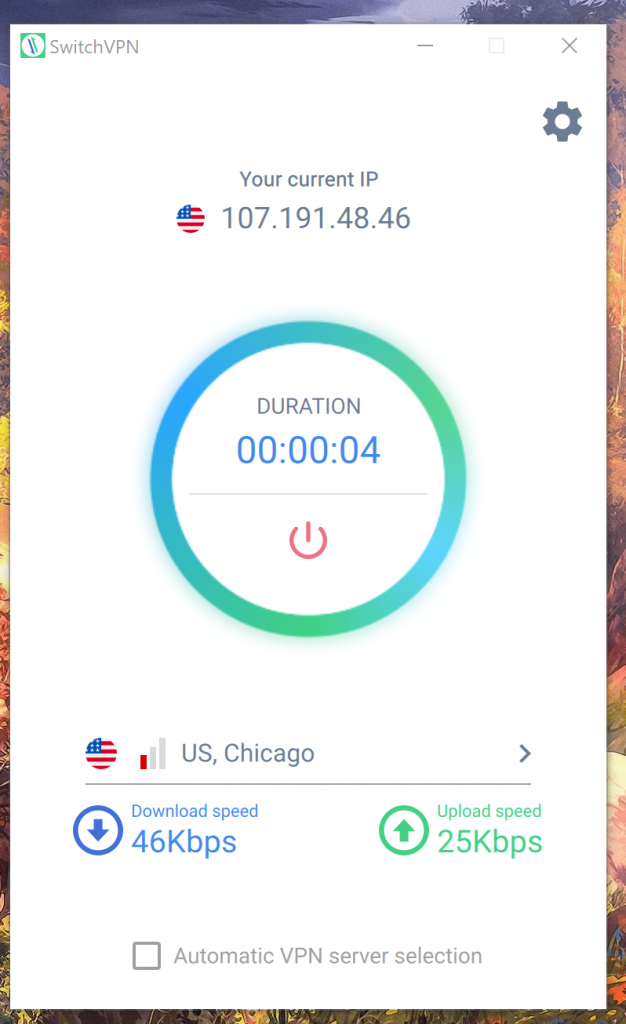 The settings are easy to find, although you need to enable the kill switch yourself. 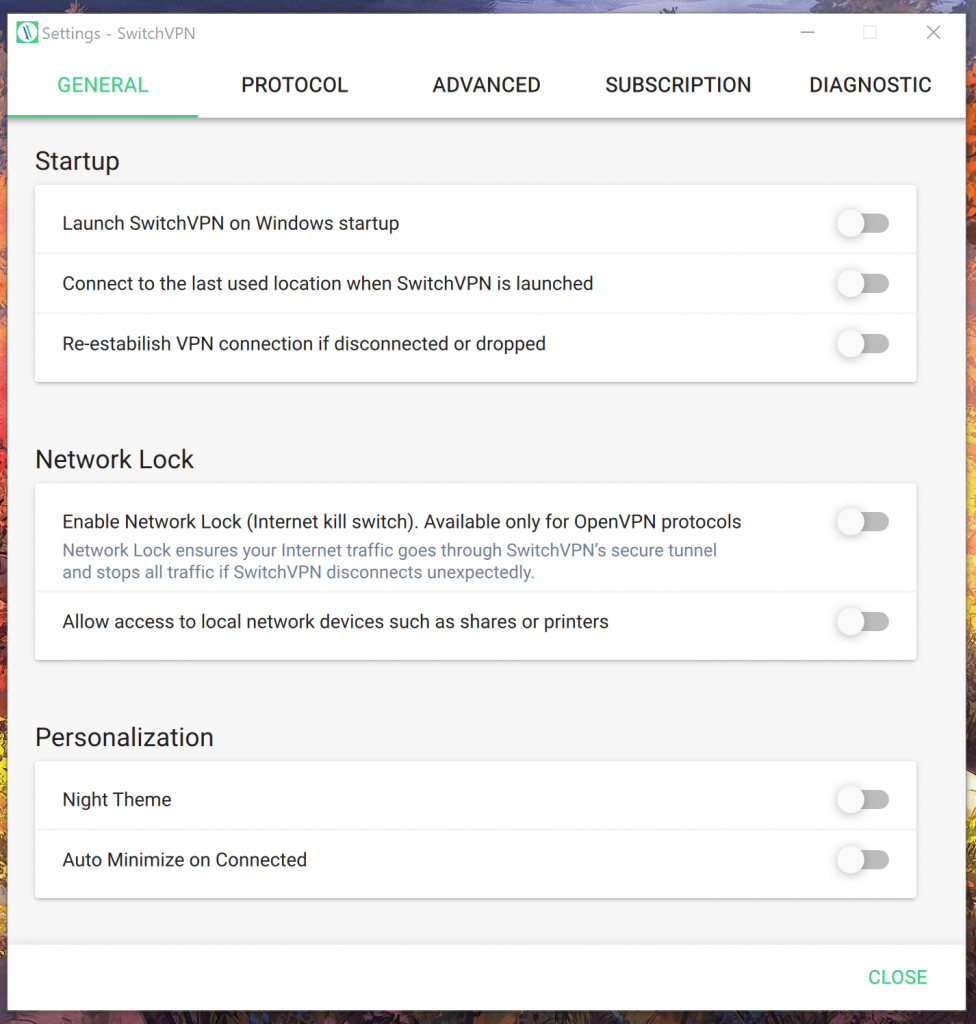 Overall, SwitchVPN lives up to their promise of a “user-friendly app”.

Although the chat box is available on the website 24/7, all it does is set you up to get an email response. You might get lucky with a response directly in the chat box, but you also might be waiting a while. 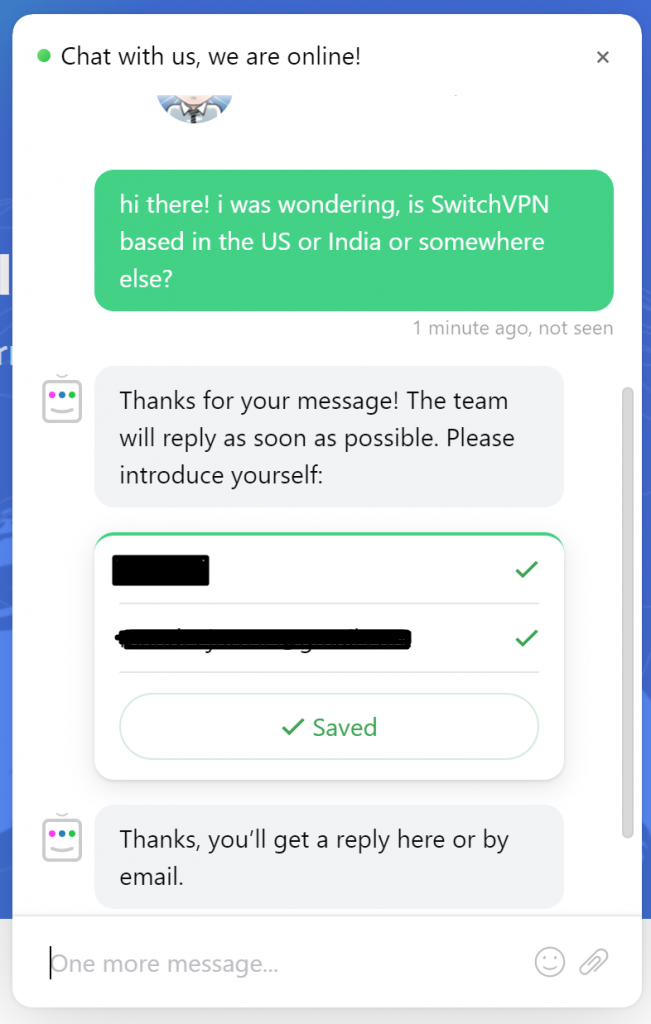 How to Cancel SwitchVPN and Get Your Money Back

If you’re finding yourself frustrated with SwitchVPN and wanting a refund, this is what you need to do:

That’s it! SwitchVPN promises a “no questions asked” refunds policy.

How much does SwitchVPN cost per month?

Does SwitchVPN work for Netflix?

Yes, we were able to access Netflix US on all 5 servers we tested.

SwitchVPN does appear to be legitimate, yes.

Is SwitchVPN a good VPN?

SwitchVPN promises to be a good VPN, but will need to be more transparent and sort out some of their issues first. Compare VPNs to get a VPN that suits you.

Does SwitchVPN hide our IP address?

Yes, SwitchVPN will hide your IP address while you’re connected to their service.

Yes, though you can also opt for a yearly subscription instead if you prefer.

Is SwitchVPN a zero-logs VPN?

SwitchVPN claims to be a zero-logs VPN, but there is some data being collected.

Can you cancel SwitchVPN anytime?

Yes, you can cancel your SwitchVPN subscription at any time from within your account dashboard.

Is SwitchVPN safe in China?

SwitchVPN claims to have been developed to combat online censorship in places like China. However, we do not recommend using this VPN if you live in or will be traveling to China.